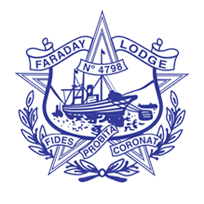 Faraday Lodge No 4798 owes its inception to a small group of enthusiastic brethren of various lodges who were engaged in electrical engineering in Woolwich, in south-east London, and because of the difficulties caused by the First World War, decided to meet locally from 1916 onwards. Eventually they formed themselves into the Faraday club, the name being derived from the cable laying ship SS Faraday with which the brethren had a close connection.  When the war ended the Faraday club continued to meet, its numbers grew, and the idea of forming a new lodge came under consideration. A petition was presented to the United Grand Lodge of England to grant a warrant for a new lodge, and, having acted on their advice that brethren other than those connected with the electrical trade should be included among its founding members, the Faraday lodge was launched on 19th June 1926.

Cookies are very small text files that are stored on your computer when you visit some websites.

Use the slider below to see the different types of cookies you can choose to allow.

Drag the slider across to change your cookie settings

This website will:
This website will not:
Saving option...
Cancel Save and Close
Find out more about Cookies
For your new settings to take effect, this page will automatically refresh when you click "Save and close".